first (adj.) being number one in a series; earliest in time; foremost in importance.

It is my humble opinion, that as a whole, we usually remember and appreciate our "first" experiences in a fond way. First kiss... first true love... first "time" (if you don't know what that means, just quit reading now and go back to bed!) And of course, the reason for this post... first bike.

When I was about 9 or 10 years old, my dad procured for me a small mini bike. Unfortunately, I don't have any pictures of it, so with my memory in charge, I searched the internet trying to find something that looks like what I had. This is the closest I could come up with. It's called a Lil' Indian with a Briggs and Stratton motor. 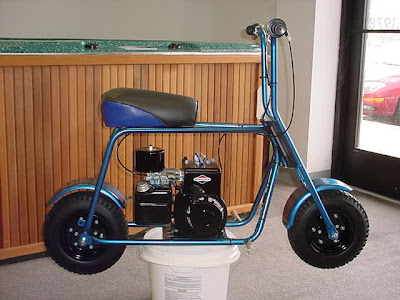 This looks almost identical and even though it's the same color blue, mine looked really used... kind of crusty. 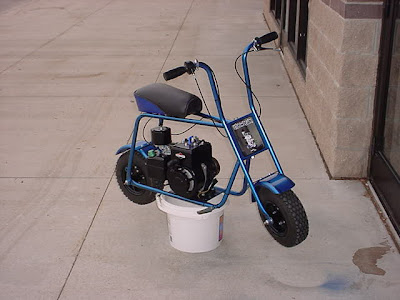 It started with a pull cord, like a lawn mower and sounded about as strong. I remember not having to do anything with my feet, but as a one speed automatic, my right hand worked the throttle, and my left hand worked the brakes.

It didn't have much power (lawn mower engines don't ya know!) but that wouldn't stop me from thinking I was the Queen of the playground riding around on my "cool" minibike. Our house was right across the alley next to this big park. Burden Park was my backyard for years. 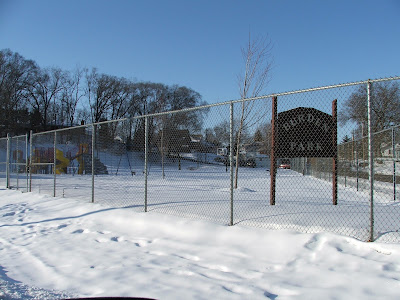 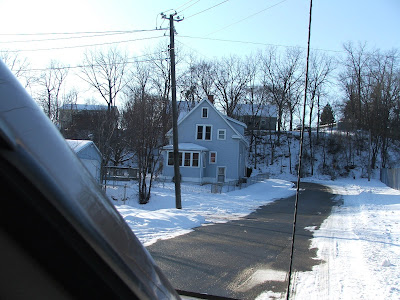 One day, this boy who was younger than me but bigger in size, didn't like the fact that I thought my sh*t didn't stink while I putted around the grounds showing off my "riding skills". He stepped in front of me one time and challenged me to a standoff. He glared at me and said ... "that's a piece of crap! I can hold on to it with my bare hands!" Well, not liking his attitude and thinking I was going to show him a thing or two, I started inching my mini bike forward and told him he better get out of my way before I run him down!
He stood firm and grabbed my handlebars and held me still. At first I thought I was going to hurt him so I gave it just a little bit of gas. Nothing happened. I gave it some more gas, and still nothing happened. I rolled that throttle back as far as it would go and that little creep was able to hold me still while my poor little bike kept whining and spitting grass up from the rear tire. Geesh! I was so humiliated! When my dad came home from work that day, I cried on his shoulder and told him he needed to get me a bigger, stronger mini bike so I could run over that boy! He just laughed and said... "why don't you tell that boy to bring his mini bike to the playground for a race?" When I related to my dad that the bully didn't have one, he reminded me how fortunate I was to have what I had. For some reason, I don't remember being bothered by that kid after that.

Over the next couple years, I had a great time riding my crusty blue mini bike, taking it to the woods, riding on trails, and playing around the dirt tracks on the weekends we would go to family motorcycle events. We would often go camping with friends of my mom and dad's who shared a love for motorcycles and motorcycle racing, always going to sites that had creeks for swimming and trails for riding. They had two daughters who were my age and one year younger and a younger son. The two girls had mini bikes too, but because their dad was a racer and a mechanic, they were a few levels above me on the type of bike they were riding. Theirs looked something like this. 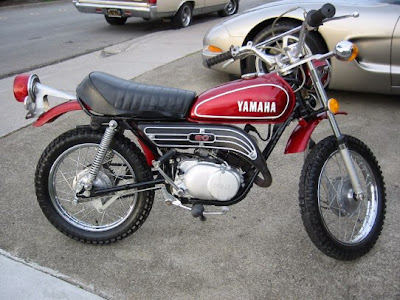 As you can see by comparison, I was again lacking and would wish I had a bigger more powerful mini bike. I would get bogged down in the sand, stall on small hills, get a sore arm from having to pull the fricking cord a thousand times, not to mention... I could never keep up! I used to beg my dad for a big dirt bike and he would just tell me to get a job and I could buy one. Geesh... (I was only 12 years old at this point!) That was just my dad's way of letting me know it wasn't in the cards and even all those years ago... I truly appreciated his humor.

REMEMBERING... YOUR "FIRST"
(to be continued)

Ahhhh, this brought back so many great memories. I loved that your parents were actually into it with you. Such fun that was for you. Now that you got your "bigger" bike, you ought to hunt down that bully and show him! *cracking up*. I can see it now.

Sucked me right in. Can't wait to read the rest.

My first was a moped.

My first was a homebuilt minibike, with B&S lawnmower engine. I rode it all around the neighbourhood.

can't wait for part two. I'll bet you had a showdown with "that boy"

What a great read. I could just see you puttin around on that little bike. Sparks my memory cells.

KT... It would be funny to run into that boy again, but for the life of me, I can't really remember who he was! Just goes to show you... he really didn't matter anyway!

Mr. M... I remember wanting a Moped real bad... then I could have rode it on the streets. As it was, my little mini bike was not street legal so I was very limited in my accessibility.

Bobskoot... it seems like everybody, no matter how much your family had or didn't have, had at least one little mini bike in their childhood. If they didn't... they sure missed out!

Wooley... Yes sir... Even if it wasn't the biggest or baddest, it still produced some cool memories. :D

that mini bike cracks me up, nice post.
Big Al

Webster... I would like to ride my Glide to Iowa some day... and of course a ride to the playground would be in order!

Great story! Thanks for sharing it!

Got me thinking about my first...
It was a lot like yours with the simple hand controls and the pull-cord. It was green and made by Rupp. Good memories!

What a great post. I bet that boy that grabbed your handlebars drives a car today. Now I can't wait for the next in the series....

Dean... I tried to jog more memories loose concerning that little bike... but the showdown on the playground is clearly the most unforgettable one. :)

Gary... As I said to KT... I really can't remember who that kid was, but it would be very cool to go home and ride around Burden Park on my Glide. Problem with that is... today I'd get a ticket! LOL!

Yea, you were lucky alright. Go Figure our Dad got a mini bike for the only girl in the family. Lady R had 3 brothers who begged for A mini-bike. And guess what? you guessed it... NO MINIBIKES!! I got my bike after I left home... Pfftt!! Dad always did like you best.

Bucky... wahhh, wahhh! I can't help it if I was our dad's favorite daughter! LOL!
BTW... Do remember what ever happened to that little bike? For some reason, I thought you guys were able to play with it later on.