PIC OF THE WEEK - NAME THAT CLOUD

I hope you all survived the Thanksgiving holiday, complete with full bellies and kicks in the shins (that's for all you black Friday shoppers!) Mine was a very lazy one this year, but it was totally the best.  Harley and I went back up to the mountain to see if we could get our bee hive and it appears (as RichardM stated in his comment) someone probably used it for target practice. It was shot to hell and back... left nothing but gray confetti hangin' on a stick. It was not purty! Damn Richard, how did you know?

Anyway, my monitor went bad last week and I didn't replace it until yesterday, so I wasn't able to ponder over my photos and prepare properly for my Pic of the Week. Forgive me folks, but I'll try to do better next time.

This pic has been hanging around my files for a long time and for some crazy reason, I just can't delete it.  I know I'm grasping here, but I always thought there would be an appropriate time for a pic like this. Today... is that time. 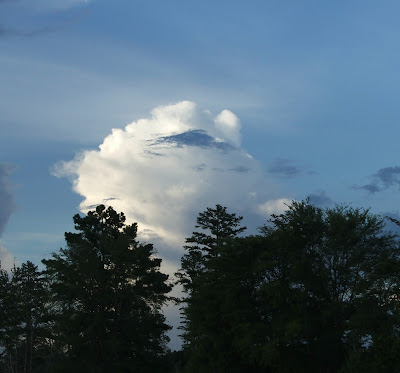 I think I'll let you all tell me what YOU see. I know what this cloud looks like to me, and I was wondering of anybody else sees what I see. Please comment and let me know!

Have a great week everybody, and don't forget... Name that cloud!

A little boy and his grandfather are raking leaves in the yard. The little boy sees an earthworm trying to get back into its hole. He says, "Grandpa, I bet I can put that worm back in that hole." The grandfather replies, "I'll bet you five dollars you can't. It's too wiggly and limp to put back in that little hole." 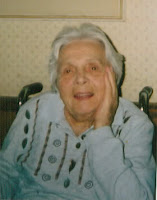 I'm inspired by two of my favorite bloggers... Mq01 over at Ms. M's Place and Kurt Sutter, creator of Sons of Anarchy and his blog, SutterInk.  Kurt posted his first and Ms. M followed suit. It seemed fitting for today.

For love... I almost became a widow this summer, but God spared me that.

For my job... In today's economy, I'm very grateful to be blessed with work.

For family... Coming from as large a family as I do... you never feel alone.

For friends... I have some real gems in my collection. (I couldn't make it without you!)

For my relatively good health and somewhat sane peace of mind.  (or at least that's my story... and I'm sticking to it!)

For my dad's discipline and keen sense of humor, and my mom's patience and consideration.

I am thankful I had parents that loved each other and worked together, to mold me into who I am today. 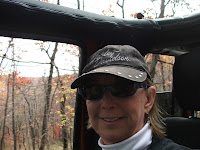 Whether you're celebrating your holiday with a house full, or just a few... take a moment to look around the room.  Savor the moment... and count your blessings.

What are you thankful for?

PIC OF THE WEEK - WHAT'S THE BUZZ?

Harley and I have been hunting new roads and trails that lets us play in our Jeep the way Jeeps are meant to be played with.  Last Saturday, we were in the woods away from all other traffic, enjoying the comfortable temperatures of fall when Harley spotted this huge wasp nest. 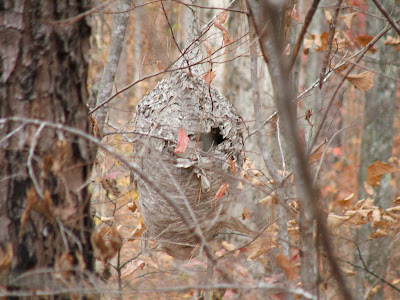 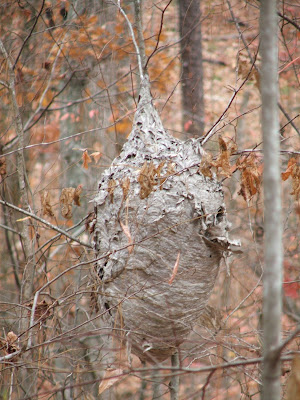 It was the biggest wasp nest I've ever seen!  We sat there and watched it for a while to see if it was still active.  Harley had this big idea to cut it down and take it home with us.  Although we both agreed that this would look cool hanging in our backyard, neither one of us was willing to go tap it to see if it was full of bees!! 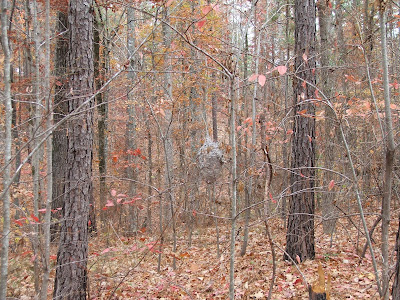 We had the machete, but we didn't have any way of wrapping it up or carrying it.  I think we'll visit that place again, armed with wasp spray and a plastic garbage bag.  Probably not the smartest plan I've ever had, but certainly the most daring. I'll let you know how it turns out.

I guess I'll be like Paul Harvey next week and give you all... "the rest of the story!"

Today is such a nice fall day, I think we'll go huntin'... for tire killers!! 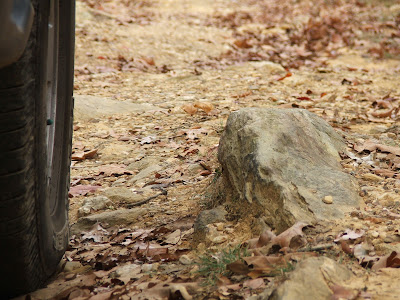 We found an awesome road to practice our 4X4 skills.  We just have to watch out for those dangerous predators of rubber! I'll let ya know if we find some! 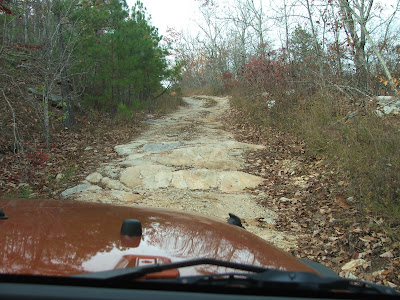 Whether your on two... or four... Let's ride!! Have a great Saturday everybody!!

A man walked into the produce section of his local supermarket and asked to buy a half head of lettuce.  The boy working in that department told him that they only sold whole heads of lettuce. The man was insistent that the boy ask his manager about the matter.

Walking into the back room, the boy said to the manager, "Some dummy wants to buy a half a head of lettuce."

As he finished his sentence, he turned to find the man standing right behind him, so he added, "And this nice gentleman kindly offered to buy the other half."  The manager approved the deal and the man went on his way.

Later, the manager said to the boy, "I was impressed with the way you got yourself out of that situation earlier.  We like people who think on their feet here. Where are you from, son?"

"Well, why did you leave Alabama?" the manager asked.

The boy said, "Sir, there's nothing but prostitutes and football players there."

"Really?" replied the manager. "My wife is from Alabama."

PIC OF THE WEEK - ON TOP OF REBECCA

Saturday, Harley and I loaded up the puppies and took a topless Jeep up to the Talladega National Forest.  It was a gorgeous fall day with sunny skies and temps hoovering in the mid 60's.  We had all terrain fun with our four wheels and saw some great fall colors to boot!

ON TOP OF REBECCA 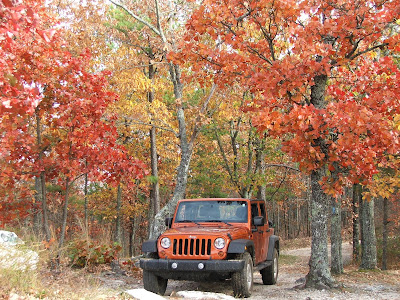 (sung to the tune of "On Top Of Old Smokey")
On top of Rebecca,
All covered with trees.
Look how my Jeep matches,
With all of these leaves.

What else were you thinking?? Hmmmmmmm...??? 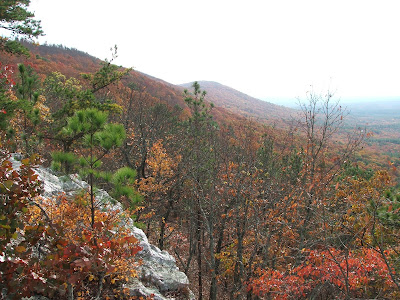 Rebecca Mountain joins up with Horn Mountain as they serve as foothills to their bigger brother, Mt.Cheaha, which is Alabama's highest point. 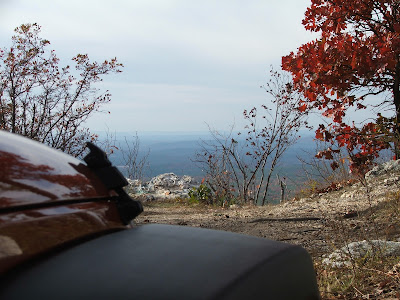 I just love crawling through the forest and creeping our way through God's beautiful creation.  The peek-a-boo views are worth every effort that it takes to get here.

I have more to share and pictures to show, but for now... have a great week everybody!

Today is Veteran's Day... the day to honor and remember all the men and women who served (and are still serving) in our Nation's Armed Forces.  So to all of them... THANK YOU!

Usually, my Veteran's Day posts are more somber, but since today's holiday fell on a Friday, (my "Funny" day), I decided to let our guys and gals in uniform show you the lighter side of military life.  It can get pretty intense for them sometimes and you just have to grab your fun however and whenever you can.  I found these pics on CrookedBrains blog and the joke came from the Reader's Digest's "Humor In Uniform".

RETIRED NAVY ADMIRAL
A retired Navy admiral, my father, began a second career working in a bank. One morning, while he prepared his desk for the day, he was approached by a young officer from the nearby Naval base.

“Sorry, but this department isn’t open yet,” Dad said.

“But its nine o’clock!” protested the officer.

My father didn’t look at his watch. Instead, he surveyed his customer’s uniform. 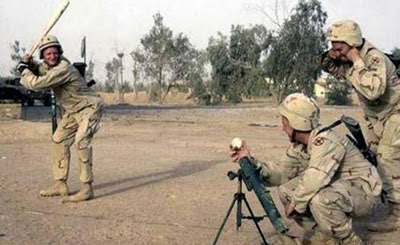 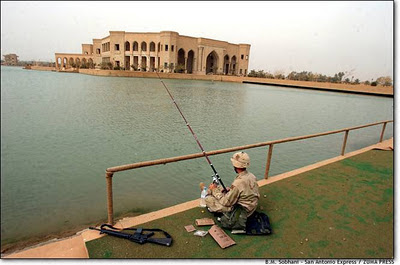 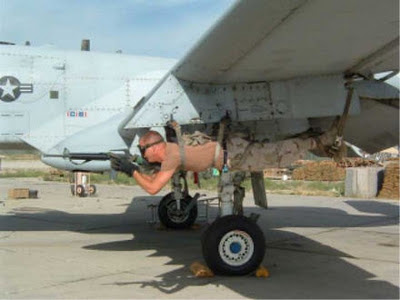 Because their sacrifice for our freedom is never a laughing matter, we chose to remember them with respect and honor.  However, we all know... laughter is the best medicine.

PIC OF THE WEEK - COTTON

No... that's not snow... it's cotton!  It's harvest time around here for cotton and I was able to get a couple good snaps of a typical (albeit a bit on the small side) cotton field before it was picked clean of it's treasure. 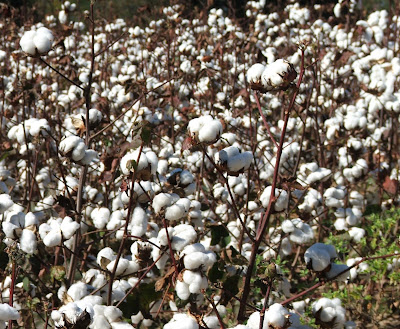 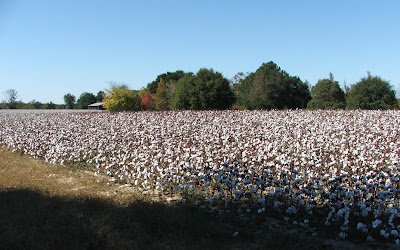 FRIDAY FUNNY - IN CASE OF EMERGENCY

IN CASE OF EMERGENCY
Warning: Today's funny is for ladies only. Sorry guys, you may just want to close your eyes... don't say I didn't warn you!

I had a flat tire yesterday, so I got out of the car and opened the trunk.

I took out my cardboard men, unfolded them, and stood them at the rear of  my car facing oncoming traffic.  The cars started slowing down to look at my life-like men, which made it safer for me to work at the side of the road.

Unfortunately, traffic started backing up.  Everybody is honking their horns and waving like crazy.  I couldn't worry about all that, I had a flat tire to change.

It wasn't long before a state trooper pulled up behind me and said... "What's going on here?"

"My car has a flat tire," I responded calmly.

"Well", he continued, "what are those cardboard men doing here by the road?"

I couldn't believe that he didn't know... So I told him,

"Helloooooo... those are my Emergency Flashers!" 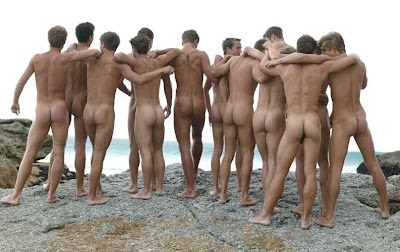 I just wanted to take some time today to remember my dad. It will be two years this coming February since he passed away, and not a day goes by that I don't have some thought of him.  Going through the year of "firsts" was terrible, but today being his second birthday in heaven, it feels good to be able to remember him and laugh over stories of him (which there are many, trust me!).

For me, my dad was my strength, my motivator, my provider... my hero. He was a firm believer in the motto..."spare the rod, spoil the child", but through it all, I always felt his love.  I'm very proud of the person I am today and I owe it all to him and my mom.  He was a man who lived as though family was the most important thing in his life.  It's amazing what that feels like.

To the man who started it all... my first motorcycle ride (I've shared this before, but here it is again). 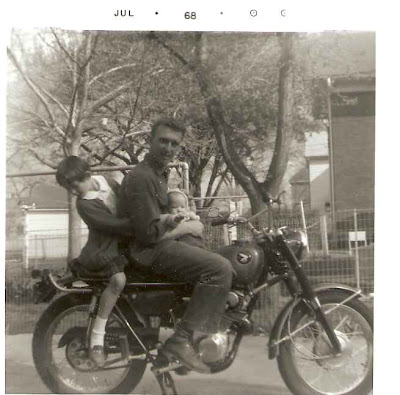 And my most favorite picture of all, (probably because it's the last picture I have of me and him together) New Year's Eve 2009. 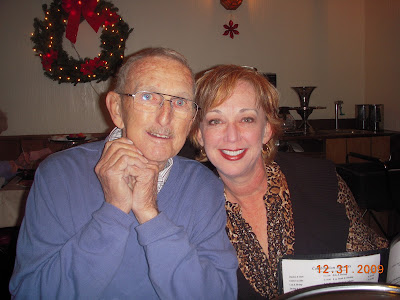