Luke 2:8-14 “And there were in the same country shepherds abiding in the field, keeping watch over their flock by night.
And lo, the angel of the Lord came upon them, and the glory of the Lord shone round about them: and they were sore afraid.
And the angel said unto them, Fear not: for, behold, I bring you good tidings of great joy, which shall be to all people.
For unto you is born this day in the city of David a Saviour, which is Christ the Lord.
And this shall be a sign unto you; Ye shall find the babe wrapped in swaddling clothes, lying in a manger.
And suddenly there was with the angel a multitude of the heavenly host praising God, and saying,
Glory to God in the highest, and on earth peace, good will toward men.

Unknown and insignificant to many, the shepherd’s life was one of hardship and isolation. It was a job that paid meager wages, a job without glory and little recognition. Being a shepherd was not a career choice. In a society such as Israel’s, somebody must watch the sheep. As a result, the poor man was able to carve his notch in society by hiring himself out to render this service to other men.

The hills of Judea were the work place of the shepherds. The soil was rocky, the hills and mountains were rugged and treacherous. The terrain was filled with wildlife from which the sheep must be shielded. Judea was hot in the summer and cold in the winter, cold enough at night to take the sheep out of the fields and place them into the folds. Being a shepherd was not necessarily back-breaking work, but it was certainly a lonely life almost sure to end in financial poverty.

God chose this class of men to be the first recipients of the greatest tidings ever revealed unto man kind. Was this a mistake? Could the angel have mistakenly delivered the message to the wrong people? There was no mistake. Unlike most monarchs, Jesus was a King for the people. “to all people.” The angle from the Lord delivered the message with pinpoint accuracy to those for whom it was intended, the people. The angel revealed "unto you a child is born." The Sovereign of the universe would come and be born to the people. The king would not be born within the walls of a royal palace, but rather in a barnyard stall where He could experience from the first day, the life of the people for which He came to save; the humble, the poor in spirit, the meek.

What happened next I like to refer to as the poor man’s concert. They, smelled like sheep, they were unshaven, dirty, and wearing their working clothes, yet these unsuspecting shepherds of Judea were the only guests invited to this heavenly concerto. A heavenly host proclaimed the praises of God for what was revealed to man. The peace that comes by knowing the Savior... now revealed. The love and goodwill that God bestowed on that day will never have its glory repeated. For on that day we, the people, were given the Gift of God. Emmanuel. We should give thanks for the birth of the Savior who is Christ the Lord. For without His birth, there could be no death and without His death, He could not become the firstborn from the dead. Oh how great the salvation in Jesus! How generous the grace of God who made it possible for all people to be saved through faith.

Perhaps you feel as unknown and as insignificant as a nameless shepherd in Judea. Be assured the Lord knows who you are. And though we never hear with our mortal ears the heavenly host praising God, on the day of your obedience to the gospel call, the heavenly chorus burst forth in songs of joy for the next measure of the poor man’s concert.
By Kenneth R. Peden
From Expository Files 10.11; November, 2003


MERRY CHRISTMAS TO ALL, AND TO ALL... A GOODNIGHT!

I find myself spinning like a dog chasing it's tail... and it's making me dizzy!  I could bore you with life's woes, but the bottom line is... I'm taking a break until after the New Year.  My life has enough going on in it right now, that "just one more thing" could break the camels back.

We've been painfully watching my MIL slip away from us while she is in the end stages of COPD, and we are at a point that Hospice is with her round the clock. Without going into the whole story, I'm sure you understand what Hospice means, and it's just not a pleasant thing.

The current news of the precious Angels from Sandy Hook presses down on the heart and keeps you reeling, along with your own sadness. The days on the calendar continue to tick away, even though I feel like my world is on hold for some reason. That happens to you when someone very dear to you is dying and everything else in life fades to the background.  Why won't things just stop for a moment so I can take care of everything? Take time to be with your families and enjoy them while you can.  This is the season of CHRISTmas and I hope you all have a very Merry one!

An elderly man in Louisiana had owned a large farm for several years.

He had a large pond in the back. It was properly shaped for swimming, so he fixed it up

nice with picnic tables, horseshoe courts, and some apple and peach trees.

One evening the old farmer decided to go down to the pond, as he hadn't been there for a while, and look it over.

He grabbed a five-gallon bucket to bring back some fruit.

As he neared the pond, he heard voices shouting and laughing with glee.

As he came closer, he saw it was a bunch of young women skinny-dipping in his pond.

He made the women aware of his presence and they all went to the deep end.

One of the women shouted to him, "We're not coming out until you leave!" 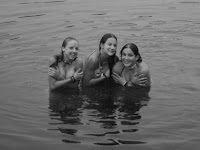 The old man frowned, "I didn't come down here to watch you ladies swim naked or make you get out of the pond naked."

Holding the bucket up he said, "I'm here to feed the alligator..."

My tree is up and decorated! Yay!  It's beginning to look a lot like Christmas!! 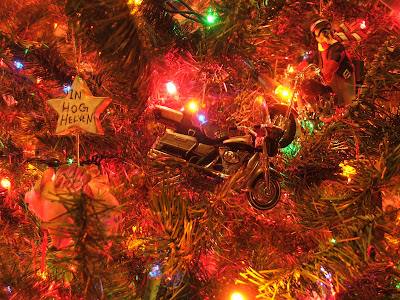 Update:  Just wanted to let all you pet lovers out there know, Joker is much better.  He almost acts like his old self again. Thank you for your get well wishes!
Posted by Lady R (Di) at 6:13 AM 4 comments:

Author's note: I'm sorry I was absent Monday, but my little Joker has a pinched nerve at the base of his neck which has been consuming my attention.  It's a terrible thing to hear the little guy cry and whimper in severe pain and I cannot do anything to alleviate the problem.  We have him on anti-inflammatories that are starting to help him, but we may not be out of the woods with his problem.  Our vet said, dogs can suffer the same fate as humans when it comes to disc problems and spine issues. The funny thing is... we are talking Chiropractic therapy to avoid surgery.  Go ahead... roll your eyes, but I have been known to be a bit off the deep end when it comes to my four legged babies. In light of my dilemma, I've decided to share this loving pet owners demise as she does the necessary things to take care of her own precious baby. Enjoy! 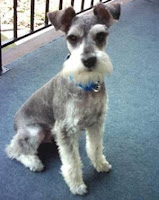 My wife found out that our dog (a Schnauzer) could hardly hear, so she took it to the veterinarian.

The vet found that the problem was hair in the dog's ears. He cleaned both ears, trimmed the hair, and the dog could then hear fine. The vet then proceeded to tell Andrea that, if she wanted to keep this  from recurring, she should go to the store and get some Nair hair remover and rub it in the dog's ears once a month.

Andrea went to the store and bought some Nair hair remover.

At the register, the pharmacist told her, "If you're going to use this under your arms, don't use deodorant for a few days."

Andrea said, "I'm not using it under my arms."

The pharmacist said, "If you're using it on your legs, don't use body lotion for a couple of days."