An older lady decided to give herself a big treat for her 70th birthday by staying overnight in a really nice hotel.

When she checked out the next morning, the desk clerk handed her a bill for $250.00.

She demanded to know why the charge was so high. "I agree it's a nice hotel, but the rooms aren't worth $250.00 for just an overnight stay!  I didn't even have breakfast."

The clerk told her that $250.00 is the 'standard rate', and breakfast had been included had she wanted it.  She insisted on speaking to the Manager.

The Manager appeared and, forewarned by the desk clerk, announced: "This hotel has an Olympic-sized pool and a huge conference centre which are available for use."

''Well, they are here, and you could have," explained the Manager.

He went on to explain that she could also have seen one of the in-hotel shows for which they were so famous. "We have the best entertainers from the world over performing here," the Manager said. "But I didn't go to any of those shows," she said."Well, we have them, and you could have," the Manager replied.

No matter what amenity the Manager mentioned, she replied, "But I didn't use it!" and the Manager countered with his standard response.

After several minutes discussion, and with the Manager still unmoved, she decided to pay, wrote a check and gave it to him.

The Manager was surprised when he looked at the check. "But madam, this check is for $50.00."

"But I didn't!" exclaimed the very surprised Manager.

I thought it would be fun to get my readers to help me with this one.  I've been trying to come up with a clever caption for this picture, and all I can think of are smart ass observances that would probably make the woman in this picture knock me into next week!

What do you think?  What comes to YOUR mind when you see this... 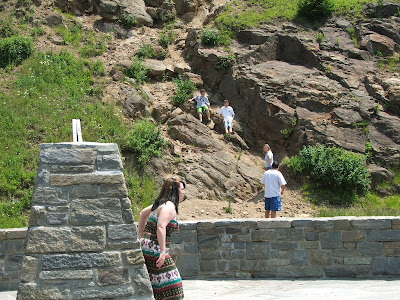 FRIDAY FUNNY - "WE NEED TO STOP CUTTING DOWN TREES!" 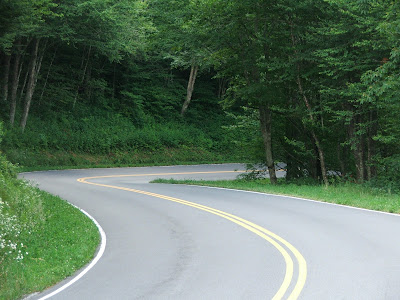 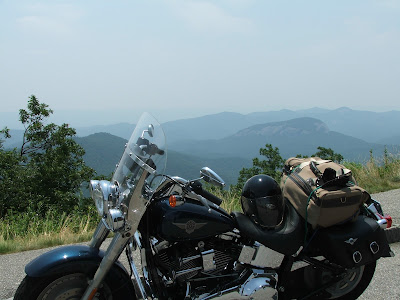 TO THERE...
Ahhhhh... Have a great week everybody!

FRIDAY FUNNY - "PRESS 'ONE' FOR ENGLISH" 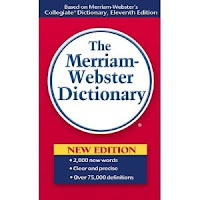 For today's Friday Funny, I decided to post an email I received quite some time ago. I'm one of many who gets frustrated when the voice on the phone asks us to... "press one for English."  We ARE in America, right? The place where we're supposed to already know how to speak English.  How many times have we mumbled under our breath... If you're going to live here, learn the language!  Well, maybe there's a really good reason why it's so difficult to comply with our request... take a look.
~~~~~~~~~
THIS IS GREAT!  This took a lot of work to put together... I think a retired English teacher was bored!
Read all the way to the end. This took a lot of work to put together!

1) The bandage was  wound  around the  wound.

Let's face it - English is a crazy language. There is no egg in eggplant, nor ham in hamburger; neither apple nor pine in pineapple. English muffins weren't invented in England or French fries in France. Sweetmeats are candies while sweetbreads, which aren't sweet, are meat. We take English for granted. But if we explore its paradoxes, we find that quicksand can work slowly, boxing rings are square and a guinea pig is neither from Guinea nor is it a pig.

And why is it that writers write but fingers don't fing, grocers don't groce and hammers don't ham? If the plural of tooth is teeth, why isn't the plural of booth, beeth? One goose, 2 geese. So one moose, 2 meese? One index, 2 indices? Doesn't it seem crazy that you can make amends but not one amend? If you have a bunch of odds and ends and get rid of all but one of them, what do you call it?

If teachers taught, why didn't preachers  praught? If a vegetarian eats vegetables, what does a humanitarian eat? Sometimes I think all the English speakers should be committed to an asylum for the verbally insane. In what language do people recite at a play and play at a recital? Ship by truck and send cargo by ship? Have noses that run and feet that smell?

How can a slim chance and a fat chance be the same, while a wise man and a wise guy are opposites? You have to marvel at the unique lunacy of a language in which your house can burn up as it burns down, in which you fill in a form by filling it out and in which, an alarm goes off by going on.

There is a two-letter word that perhaps has more meanings than any other two-letter word, and that is  'UP.'
It's easy to understand  UP ,  meaning toward the sky or at the top of the list, but when we awaken in the morning, why do we wake  UP  ?

At a meeting, why does a topic come  UP ?
Why do we speak  UP  and why are the officers  UP  for election and why is it  UP  to the secretary to write  UP  a report?
We call  UP  our friends.
And we use it to brighten  UP  a room, polish  UP  the silver; we warm  UP  the leftovers and clean  UP  the kitchen.
We lock  UP  the house and some guys fix  UP  the old car.
At other times the little word has real special meaning.
People stir  UP  trouble, line  UP  for tickets, work  UP  an appetite, and think  UP  excuses.
To be dressed is one thing, but to be dressed  UP  is special .
A drain must be opened  UP  because it is stopped  UP .
We open  UP  a store in the morning but we close it  UP  at night.
We seem to be pretty mixed  UP  about  UP !

To be knowledgeable about the proper uses of  UP ,  look the word  UP  in the dictionary.
In a desk-sized dictionary, it takes  UP  almost 1/4th of the page and can add  UP  to about thirty definitions.
If you are  UP  to it, you might try building  UP  a list of the many ways  UP  is used.
It will take  UP  a lot of your time, but if you don't give  UP ,  you may wind  UP  with a hundred or more.
When it threatens to rain, we say it is clouding  UP .
When the sun comes out we say it is clearing UP .
When it rains, it wets the earth and often messes things  UP .
When it doesn't rain for awhile, things dry  UP .

PIC OF THE WEEK - LIQUID THERAPY

I love listening to the sound of water moving trough a stream or small river.  The soft whooshing and spattering noise is like music for the ears, and therapy for the tired soul. I'm always capturing pictures of this peaceful medicine... 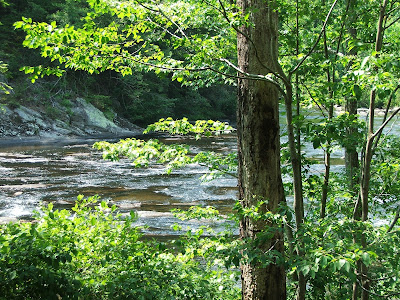 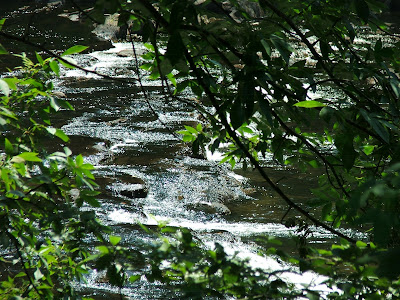 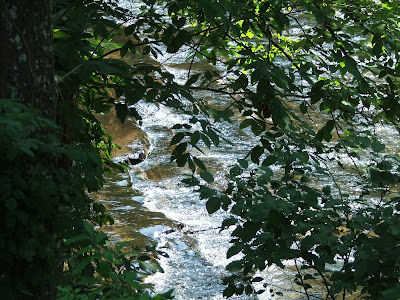 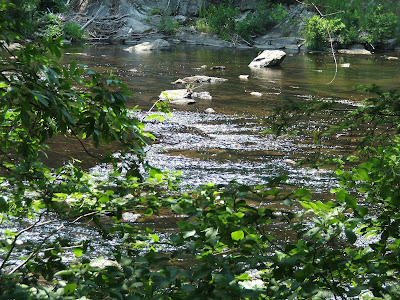 These were all taken during one of our rest stops while riding up in the Smokey Mountain National Park.  One of my absolute favorite places on this earth!

DEAD PEOPLE... THE NEXT GENERATION?

During one of our rest stops while riding on the Blue Ridge Parkway, I was in the right place at the right time when a fellow rider cruised passed us.  I heard him before I saw him, so I got my camera ready, thinking I would try to get a shot of him as he rode by. This is what I ended up with.  Hmmm... 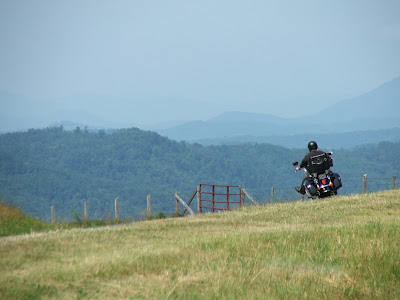 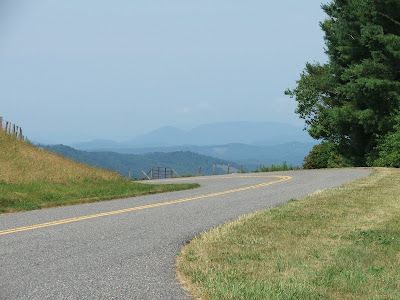 As you can see... there really was a road there, but I had fun thinking this dude decided to abandon the asphalt to play in the grass. That was one of the nice attributes of riding on the Parkway.  There were many curvy surprises that delivered the illusion and split second thought that you were going to ride right off the side of the mountain out into the open air. What a rush!

I hope you all had a great weekend!

This guy was sitting at a table in a bar and was about as drunk as it's possible to get. A group of guys notice his condition and decide to be good Samaritans and take him home.

First they stand him up to get to his wallet so they can find out where he lives, but he keeps falling down.  He fell down eight more times on the way to the car, each time with a real thud.

After they get to his house, he falls down another four times getting him to the door.

His wife comes to the door, and one guy grinning says, "We brought your husband home."

The wife looks around and asks...


I wonder if his name was Bernie?