PIC OF THE WEEK - GETTING LOST

Once in a while, Harley and I set out with absolutely no idea where we want to ride to. When this happens, we just pick a direction...whether it be North, South, East or West and go from there. This way our options are always wide open and it leaves no room for disappointment. This past Saturday, we were having one of those nice meandering rides when we found ourselves somewhere northwest of Montgomery, in Coosa county. 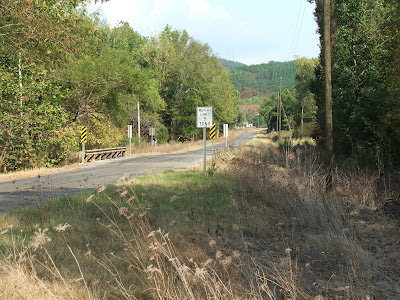 This is the kind of road a rider can get lost on... 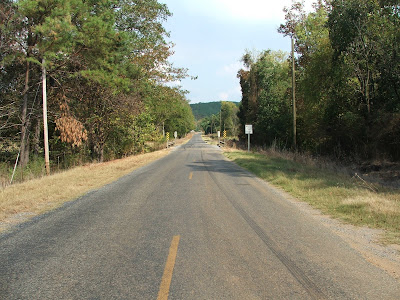 Lost is in their own thoughts, their own world, their own joy of the ride. If that's the case... are we really lost?

We had a great ride Saturday and logged around 250 miles as we found our way to Mitchell Dam at Lay Lake. I'm trying to pull together some nice post material of our beautiful roads that surround Alabama's rivers and lakes, so I can share them here with you. Exploring new county roads and practicing tight u-turns is a pretty accurate accounting of our weekend rides lately. I'd be lying if I said I wasn't enjoying the research!

In the mean time, have a great week everybody and ride on!

PIC OF THE WEEK - THE CASTLE ELECTRIC

Riding around the Alabama country side in the sizzling summer heat, we often find ourselves stretching our legs and wetting our whistles while lingering in the shadows of a tree lined driveway somewhere, usually leading you up some large corporation's property. This was one such day, when we came upon this huge generating plant and it reminded me of a castle, far up on the hill. 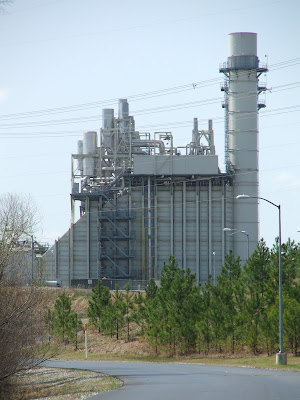 Of course it's not really a castle, but the TENASKA CENTRAL ALABAMA GENERATING STATION located northwest of Montgomery in Billingsly, AL. While we were standing around taking our break, I kept thinking how strange it would be if the flying monkeys suddenly came out armed with high voltage cattle prods and tried to take our motorcycles... Oh my!! 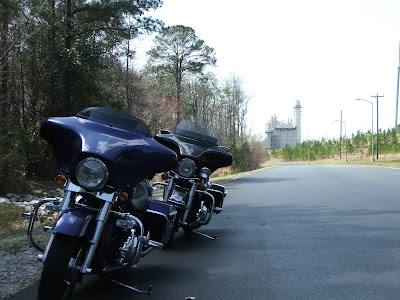 That's when I realized, the heat was frying my brain, and I took another big swig of juice! LOL!

Our days are beginning to feel less oppressive and it's going to start cooling off for us. That's when riding gets more enjoyable, cause I won't feel like a wet dishrag, just hanging on for the ride!

Have a great week everybody and ride on!! 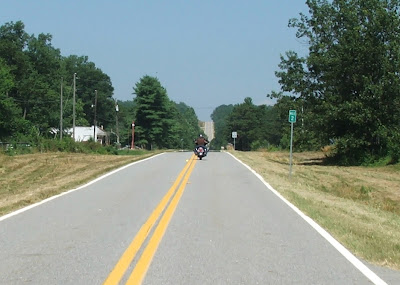 PUSSY... IN THE MIDDLE OF THE ROAD? 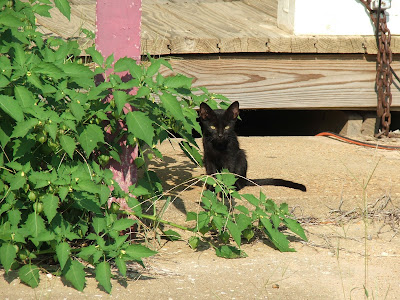 THE MIDDLE OF THE ROAD... 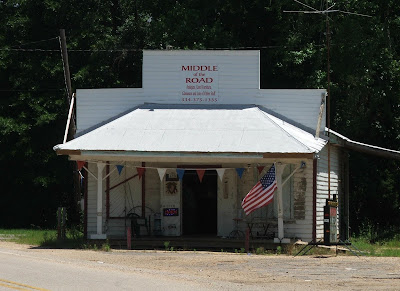 WHAT WERE YOU THINKING?? Muwahahahahaha!

A few weekends ago, Harley and I stopped at the Middle of the Road on Hwy. 21 in Wilcox County to stretch our legs and quench our thirst. Just as I was getting ready to walk across the road to take a pic, Harley stopped me by saying... "Hey, look at our little friend." 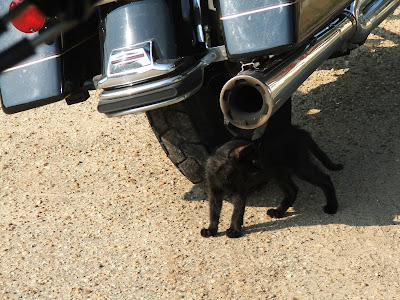 Awwww... how cute! This little puss came out from hiding for a little meet 'n greet and to check out our rides. He sauntered right over and starting rubbing his whiskers on my boot and was mewling up a storm! He seemed to be very friendly and unafraid, but would walk away if you tried to pick him up or touch him. 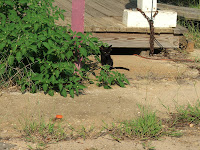 I figured the little guy was starving, but all I could do was fill up a Gatorade cap with some Gatorade and put in down on the ground. He checked it out, but it didn't seem to strike his fancy.

We all know how cool it is to meet new friends on the road... well, finding pussy in the middle of the road is no exception. Right Willy D? LOL!

I just hope the cute little guy lives a long and happy life.

Have a great day and ride on... you'll never know who you'll meet!

Email ThisBlogThis!Share to TwitterShare to FacebookShare to Pinterest
Labels: Hwy. 21, Middle of the Road, pussy

Our pal the Road Runner stayed with us this past weekend while taking care of some business here in Montgomery. Thank goodness he didn't need to spend his whole Saturday working, so we took advantage of a beautiful sunny day and took him on a little tour of some of our favorite roads around here. 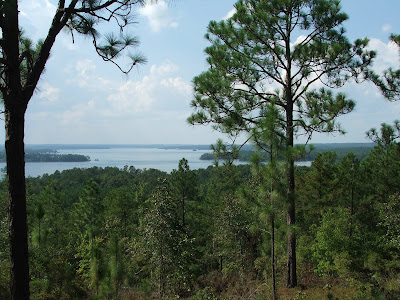 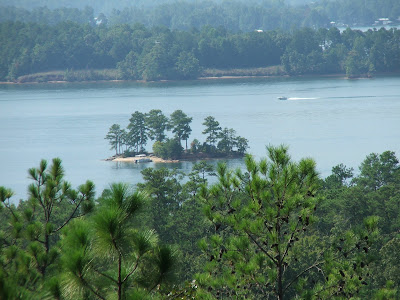 We played on Hwy 49 north, cruising through some twisties before we ended up at this pretty little spot is right off of Hwy. 50, overlooking Lake Martin. As I looked down at the water, I remembered my Sea Doo fun and wished I was bit closer to water so I could take a quick dip. At a hot 93 degrees... a refreshing swim would have felt good right then.

Besides the beautiful view, this overlook is stocked with picnic tables and garbage cans. Harley and I like to come here often to take our stretch breaks and have something to drink. 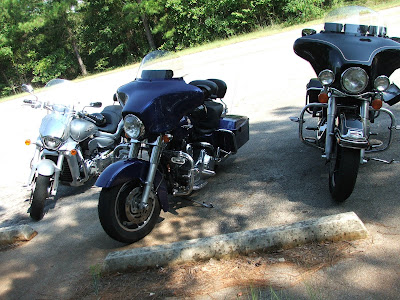 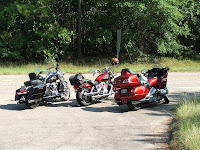 As you can see... it's a cool place to meet other riders too. Looks like a couple other Harley rider's were taking their Hondapottamus out for a little spin.

I know you've been seeing a lot of Lake Martin lately, but hey... when you live in the South, water is your friend!

It's Labor Day... a time to celebrate hard work and the end of summer. The days are getting shorter, nights are feeling cooler and the promise of Autumn is lingering just around the corner. We spent some time on Lake Martin a couple weekends ago, and I was fortunate enough to experience a couple beautiful sunrises and sunsets while we were there. Our lives get so hectic sometimes, that when I actually get to pause and enjoy these moments, I feel like I've just been given a precious gift. It was actually hard for me to pick just one. 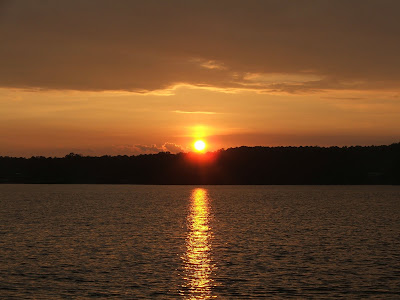 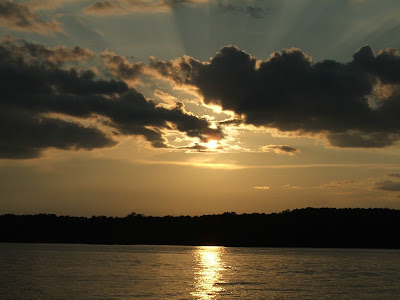 How about a bonus picture! Why not? It's a holiday and besides... I get to do what I want here. (LOL!) Now that we've said goodbye to summer with a gorgeous sunset... let's say hello to Autumn with an even lovelier sunrise. 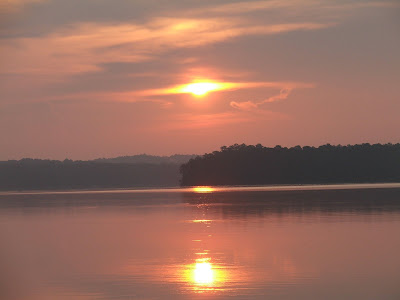 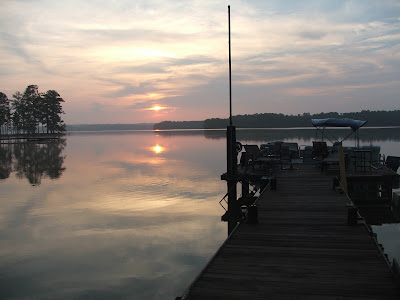 Waking up to scenery like this everyday must be good for one's soul. I think life on the lake would be like living in heaven, right here on earth. Can you imagine... riding all day till your hearts content only to come home to this? Ahhhhhhh. I've only got one thing to say... lottery!

Be sure and check out my "RIDIN' THE WATER" post from yesterday. I had a blast ridin' Sea Doo's while I was there and I definitely made some waves... that's for sure! Happy Labor Day everybody and have a great week!

A couple of weekends ago, Harley and I had the great fortune of getting to "house sit" his uncle's cabin on Lake Martin... a very comfortable dwelling paired with an awesome toy collection, namely two Sea Doo's and a Sweetwater Pontoon boat. As soon as I realized we were going to spend some time at the lake place, I was chompin' at the bit to get my hands on a Sea Doo. I've only been a passenger on one once, and since I ride motorcycles and know how much pleasure I get from that, I couldn't wait to be the operator of one of these cool machines. 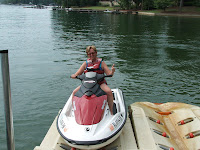 Finding out that there were only two basic functions... the "on/off" switch and the thumb throttle (no brakes, no clutch, no gears to sift through, accept forward or reverse) I realized this was gonna be just a "hang on and go" kind of deal. I stayed in our little slue while I putted around in a circle or two and got a good feel for it. I guess it took all of two minutes before I realized I was ready for some open water, so off I went.

Now, one of my favorite things to do while riding my Glide, is to accelerate through the gears at a rapid rate of speed. I don't necessarily go over the speed limit (most of the time) but I think it's fun to see how fast I can get to it... that's all. Another, is feeling the wind in my face as I cut through the warm air on a beautiful summer day. It goes along with my favorite expression, "only a biker knows why a dog sticks their head out the window."

Well, it didn't take long for me to realize this Sea Doo had some rapid acceleration power too! And instead of trying to find ways to stay cool and hydrated, skimming along on a Sea Doo allows refreshing sprays of lake water to wash over you while you speed across the water's surface. Nothing feels better than that "cooling" effect that the wind has on wet skin... aahhhhhh!

Pressing the thumb throttle all the way in makes your hair go horizontal and according to the digital dash, I was maxing it out at 75 r.p.m.'s (we figured that's about 60 to 62 m.p.h.). I was skipping across the water like a stone and flying off that seat every time I jumped a wave. The more waves I jumped, the more my ass flew off that seat. In my mind's eye, (if I were watching myself from the shore) I was flying in the air like a wind flag... feet and legs flapping behind me like ribbons... with nothing more than my hands clamped tightly on the grips! Woo Hoo!! 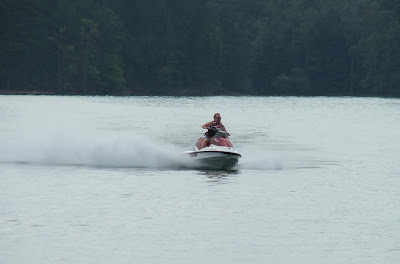 FYI... Pontoon's make the best waves, but if you find yourself lacking traffic, you can make your own. I've never mastered the art of doing doughnuts with the Glide, but doing doughnuts on a Sea Doo is nothing more than just a lot of giggly fun! Laughing out loud while almost dumping myself in, just gave me more reason to test it's limits. It's as if I were taunting my buoyant foe, "You'll never dump me.... Muwahahahahaha!!" 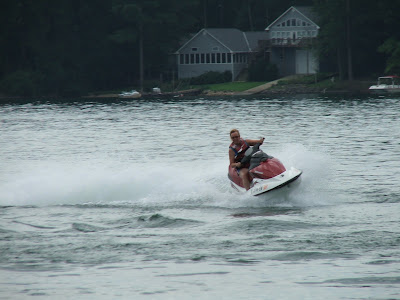 In comparing "rides" between a Glide and a Sea Doo, I would concur that both are tons of fun! Riding my Glide provides and outlet for the dangerous, daring and independent side of me while getting immense pleasure from experiencing the roads on two. If I were to find myself spending more and more time on the Lake, I would have to figure out a way to procure me a Sea Doo of my own. 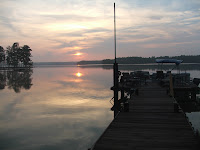 Life on the lake would be a dream, but I have a hard time getting things done as it is. Can you imagine if I had this beautiful aqua playground as my backyard? I'd be gone all the time but, you'd know where to find me... I'd either be ridin' the roads... or ridin' the water. Either way, I'd be ridin'!!