Halloween is upon us!  That's right folks, we are just days away from the annual invasion of ghosts, goblins, and little Lady Gaga's!  Okay... throw in some princesses and cowboys too, cause they'll be right there, with the witches and warlocks, scaring the crap out of the neighborhood cats and making all the dogs crazy. 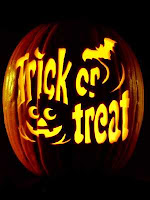 "Trick or Treat! Smell my feet... give me something good to eat!"

Truth is, I love Halloween. It's one of my favorite holidays because I get to play dress up.  Adult Halloween parties can be a blast, but I think I get more enjoyment out of seeing all the kiddos.  Even if I'm not going anywhere but to the front door (11 thousand times!) I'll often dress up to make coming to my house a bit more interesting for the little beggars. Working for a dentist has great advantages.  He makes great fangs and there's nothing funnier than watching a kids eyes grow wide with uncertainty when he sees those sharp points peeking out from under my lip. Muwahahahahahaha!

I wonder... what is your favorite Halloween memory?

Harley and I know a married couple who host a Halloween party ever year.  This is always grand annual event for them and there is usually a big crowd that looks forward to this and everybody comes decked out in some of the best costumes I've ever seen.  The refreshments were always fun because our hostess would label everything to fit the mood.  Pigs in a blanket were called mummy fingers, meatballs were monkey brains, and spinach dip would be marked as bat shit.  (Yeah... I'll take some of that!)

It was back in the late 80's when Leather Face made his comeback in the Texas Chainsaw Massacre 2.  The party was in full swing with drinking and dancing and some of the prize producing games had already begun.  We were wall to wall with merry makers when all of a sudden the front door slammed opened (that's what happens when the door gets pushed open with such force that it crashes loudly into the inside wall) and in came Leather Face... wielding an extremely loud chainsaw over his head and yelling at the top of his lungs.

Mayhem ensued!! It was a sea of assholes and elbows trying to escape the terror.  Drinks went flying, women were crying and men screamed like little girls.  I think we even had a few pissers, but I can't be certain. It was pretty wild!  Thankfully, our hostess is a party throwing professional so she had already cleared her home of valuable breakables, so a busted out screen door at the back of the house ended up being the only casualty.  (Besides a few broke fingernails and a poke in the eye!)

It was quickly revealed to us that there was no actual chain on the chain saw, but it still took over an hour for everybody to settle down enough to get the party back to a somewhat normal gathering.  Needless to say, ol' Leather Face won the "Best Costume" prize for that year. Imagine that!

So... what is your favorite Halloween memory?
Lady R

P. S.  For all my readers who thought they weren't going to get their FRIDAY FUNNY... here it is!

FRIDAY FUNNY - I DO 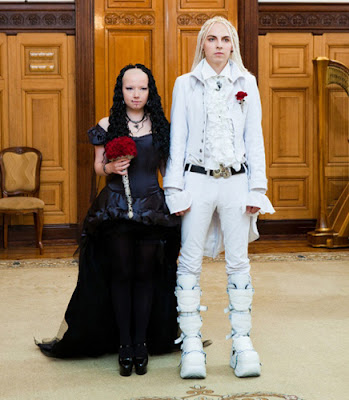 (photo taken from the web)
No... this wasn't a costume contest.  It was their real wedding picture! TRICK OR TREAT!
Posted by Lady R (Di) at 6:35 AM

Thanks for the laughs and bringing back all those memories of Halloween...My favorite well that is a LONG story and I don't want to waste all your space and time. So I will just say, HAPPY HALLOWEEN!

Bitchy... Well, I don't know why the hell not. Looks like there's plenty of room here to spill your tale. I certainly would be interested to hear about it!

Happy Halloween... to you and yours!