PIC OF THE WEEK - RIDIN' BITCH... TO ATLANTA

Motorcycles are not my only passion... I like football! This weeks Pic of the Week is not my own, but came to me via email from my brother earlier this year in a series of amazing animal pictures. It's fitting of my mood, however, as my beloved (and sullied) Auburn Tigers ( who's mascot is also an eagle) have won their way to the SEC Championship game to be played in Atlanta on Saturday, Dec. 4th. Woo Hoo! 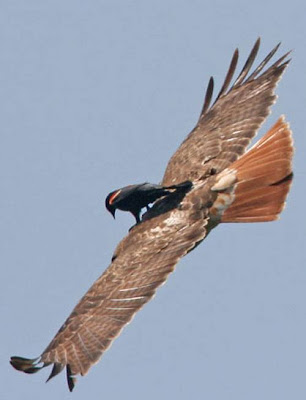 I'm sure this is probably a doctored photo, but to me, it's still awesome! Especially when I can look at it with winning eyes and think to myself... we're going to Atlanta. However, I'd rather we be playing the Florida Gators than face Steve Spurrier's South Carolina Game Cocks... again!! It will be a tough game, and they are the only thing standing in the way to Auburn's first chance in 11 years at a National Championship game. 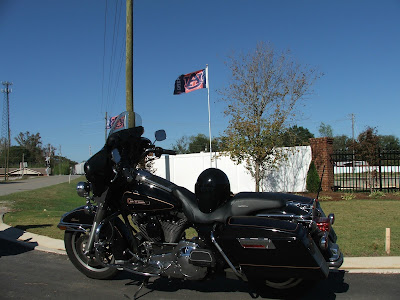 We did ride this weekend but this pic, of my Glide posing in front of the RV park at Auburn, was actually taken a couple weeks ago.

Our temps stayed pretty cool during the holiday, and we got on the Glides and enjoyed some beautiful sunny rides... just no pictures! It's hard to stop and shoot when your hands are numb! I think some heated gloves are going to be on the top of my Christmas list this year!

Have a great week everybody and...
WAAAAAAR EAGLE! HEY!!

If it's not doctored the timing was good. Your chill is far better than our freeze for a ride. Was not here for the freeze had to be in Fla. ....oh darn!

great pics! and im with you, im thinking something heated too. polly heaters may be in order here, mmmmm warm hands!! :) have a great week!

I need heated everything! Hope your Tigers kick butt LR!
That is some photo...doctored or not! Funny!

Love that pict of the hitcher. Yeah...I woke up to ice today and actually had a rear wheel cut loose. I have experience riding my bike in snow but I won't do it unless I have to.

I want a heated vest myself. Badass only goes so far...Iv'e seent the black dog. never again.

Webster... I saw that you were in Florida over the holiday and glad you could take in some of our mild chill. I'm sure the freezing cold of the North was glad to see you and welcomed you home with open armcicles. lol!

Mq01... If I can just keep my hands warm, I'm pretty good if I get cold anywhere else. And feet... gotta keep my feet warm, but that's usually not a problem.

Eve... LOL! Thanks Eve. I hope the Tigers takes it all the way. It's fun being an Auburn fan this year.

Dave... Heated vest sounds good too! We don't have it so bad around here to warrant a lot of cold weather gear, but a little bit of help goes a long way. I have no interest in meeting the infamous "black dog"!