BAGR4LF AND THE BEST IN SHOW

Emerald Coast Bike Fest 2009 - One of my favorite attractions of a bike rally is the bike show. It's like looking at candy in a candy store. Looking around at all the beautiful machines, standing proudly in their categories... it was hard to pick a favorite.

BAGR4LF - I'm particularly proud of my friend Details who won 1st place in the Touring Category with his gorgeous Road King. Way to go Details! I featured him and his sweet wife, Darlin' as my Pic Of The Week a couple weeks ago, but I couldn't do this beautiful motorcycle justice with only one picture.

The bright candy red that lies deep within the orange and yellow flames, makes this paint job pop with realistic beauty. And the vertical direction of the flame makes it look as if the bike is on fire while it sits there, showing off in all her sinister allure. 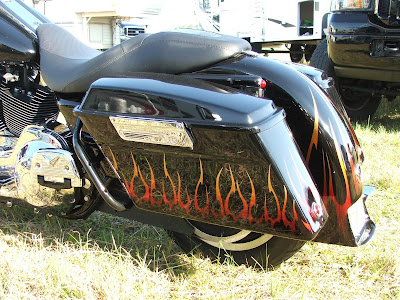 I love her vampish appeal as she draws you in, making you hungry for her details... 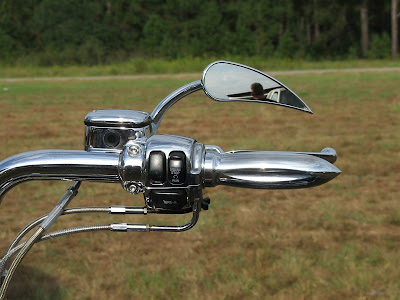 Her Heart and Soul... 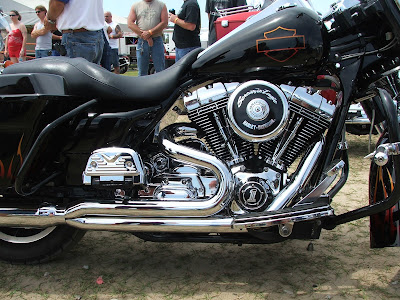 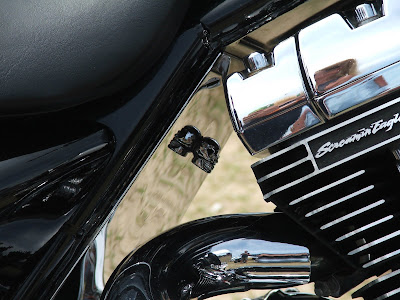 An awesome front fender... (the eyes glow in sunlight!) 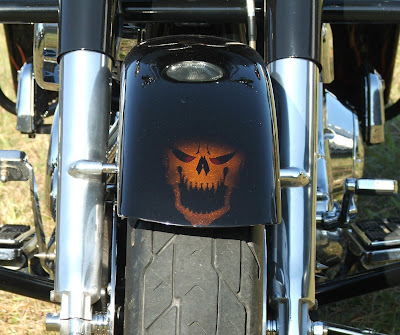 And a nice ass too! 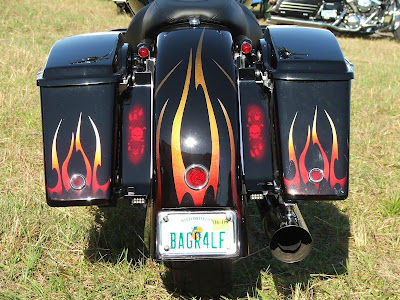 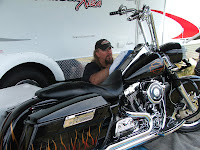 Details takes impeccable care of his baby and the attention he pays her on a regular basis made his getting ready for the bike show seem like child's play. As his hands moved swiftly and meticulously over her entire body, the bond between this rider and his machine was very evident. It was so cool for me to watch my friend take his prize when he was announced as 1st place winner for the Touring Class. This bike is hot! Congratulations again, my friend... She's a real beauty! 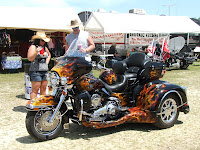 BEST IN SHOW - This trike is a true work of art. There's obviously a theme going here, so I chatted with the owner a bit to get his thoughts on how it all came about. He was a Marine Veteran who fought during the Korean War, came home... then went over again to serve more time during the Vietnam War. Like most veteran's, he was very humble about his own accomplishments, but was willing share abundant stories and praise for his fellow comrades. He was quite an interesting fella and I enjoyed talking with him. I took a card from him so I would have his information, but alas, I cannot find it.

Of course, being a Marine, it was an obvious choice to honor his branch of our Military Forces for the front fairing. (Be sure and click your cursor over the picture to see it close up, so you can see the beautiful details.) 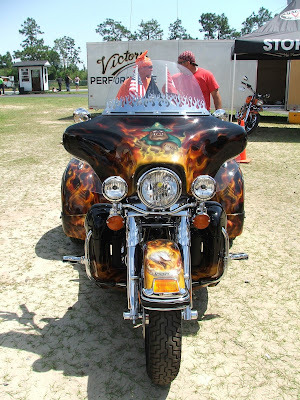 He wanted to acknowledge all ranks, from the newest enlisted man all the way to the oldest commissioned officer. 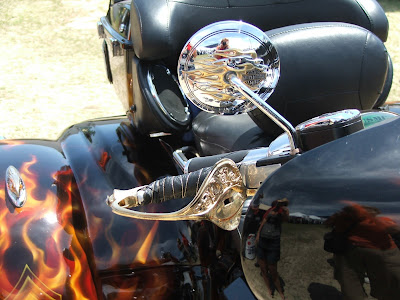 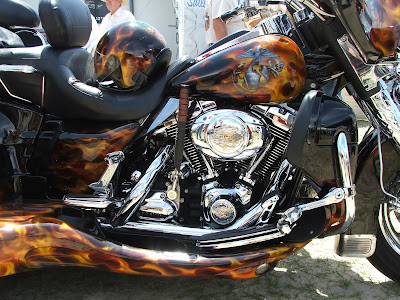 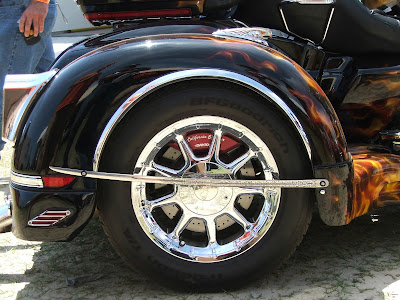 Across the bottom fender, you can see all the Armed Forces are represented with their Military seals. I particularly liked his creative use for his dog tags. 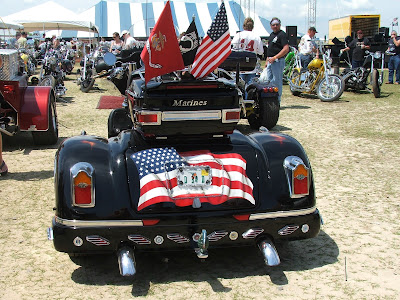 Oh look!! More Hand Grenades! His sense of humor and loyalty to Harley Davidson didn't go unnoticed. Let's hope he never has to use it. 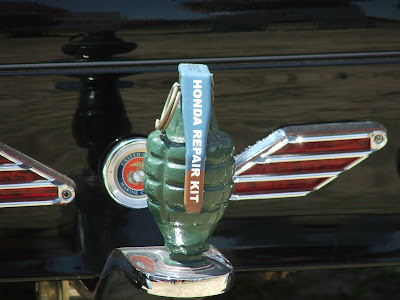 As I said, I lost his card, but he knows I plan to post about this bike. Hopefully, he will read this and comment so I can give him the proper kudos!

There were soooo many pretty bikes, but these two deserved a little feature of their own. The rally was going along nicely and the weather was holding up beautifully. I hope to bring you more goodies soon. Stay tuned...

The detail on that trike is amazing. I can see why it was BOS with the military theme. However, from my point of view Details would have gotten my vote. Something simpler, yet very appealing with that show custom look. Both are nice rides.

Both are amazing bikes and the attention to details is incredible.
They're a little too purdy for my tastes but that's what makes bikers so great. We're all drastically different in a lot of ways yet still have the deep love of motorcycles inside. Nice post.

No wonder he won. Awesome what he did to the back of the bike. The trike..Wow...love the brake lever.

Love the bike...It's a double candy store...beautiful machines and gorgeous chicks...
The best of all worlds

Very nice indeed. You were right, One picture did not do it justice. I am totally into the details myself. Speaking of which I noticed. He needs new rubber. LOL!

great pics, total eye candy!!! looks like a great time was had by all

I really like what Details did with the rear lighting. For me, that makes the bike. A clean ass is a happy ass:) And that hONDA repair kit, that’s funny.

Torch... I thought so too! There were so many other really cool looking bikes, but these two were my favs.

AZ Dude... My friend Details puts a lot of thought into what he does on his bike. But, that's what makes it special... it means more to him and that's the way it should be.

Dean... I agree. I think that's why I like looking at bikes in a show. It's kind of like people watching... very interesting, only the objects of my observation are parked still. I have more pics of the bike show that I'll be sharing with ya'll in a later post.

Webster... I thought that was a very interesting use of the saber handle too. There was so many little details on that trike, that after 10 minutes of looking at it, I still wondered if I missed something. Very pretty.

Mr. M... LOL! I'll be sure and remind Details to check his rubber!
I thought, being a painter, you might find his paint theme interesting. Details told me the painter that did this for him tried to talk him out of doing vertical flames, but he held his ground. Actually, I think it looks way cool.

mq01... yes... we were sufficiently satiated with eye candy that weekend. (and I still have more to share!)

Willy D... LOL! "A clean ass is a happy ass!" Couldn't of said it better myself! I too love that clean sleek look in his lights.
The hand grenade was a pretty cool addition. Honda lovers may disagree, but hey... who am I to argue?

Thanks for the great write up, and wonderful pics, the trike was very worthy if it's award plus the personal story makes it so much more. Interesting we had a common thread more than the bikes...the handgrenades, but ours were way sweeter. And by the way, there is new rubber, that was taken care of last week. Have a great rest of the week, and looking forward to the next post.

Wowser! Very very cool. I was starting to get a little randy when you were talking about some of it...Sorta freaked me out.

I think you had just a bit too much fun watching the hand caressing the bike thing.

Awesome picts. Sweet bikes with alot of love and hard work put into them. Rollin' art.

I used to have a hand grenade on my desk with a #1 tag on the pin. Under it said, "Complaint Dept. Please take a number." Then some douchbag complained about it and I had to get rid of it. It was considered "offensive" by HR.

Congrats on your friends award! I'll never get one of those. Well, I guess I might get the most filthy bike award one day though!

Now that's a trike with true meaning. Luv the flames and flag. I even like the windshield with the chrome flames. Awesome!

Darlin'... I'm happy to show off Detail's ride. I think it's beautiful and he deserves the spotlight for all his hard work. I think it's funny that someone noticed his tire, and then you tell me he just got one! Cool Beans!

Did you see that Mr. M! Details got his new rubber. LOL!

Had a great time all weekend and can't wait till ya'll come up and ride with us. Let us know which weekends your free! Later friend!

BTW... the next post is coming, Thanks to you!!

Dave... You thought you were randy. I watched him work, and I felt like I was intruding on a very private moment! I was getting soooo hot! LOL! No, I didn't look away... I'm just a perv at heart. (At least there were no turtles around.)

Sorry you had to lose the hand grenade. Some folks have no sense of humor... he was probably a true Richard Cranium.

BTW... I may have you beat on the dirty bike award. LOL! Glad you enjoyed the pics!

KT... Very true! The owner was happy to talk to you about his beauty. He took a few years to get it to this point, and he had a reason or story for everything he added or adapted. I really enjoyed meeting him.