WEEKEND AT THE RACES 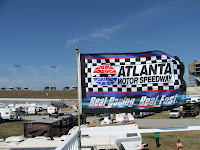 Spending a weekend in the infield at Atlanta Motor Speedway always promises to be two things. LOUD and FUN! We have a good group of friends that come together twice a year to experience some Nascar fun, and last weekend, we had the pleasure of enjoying warm temps and lots of sunshine. After suffering through many previous race weekends plagued with rain and even snow, this generous gift from Mother Nature was greatly appreciated! 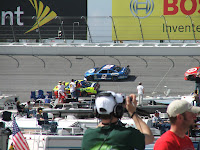 Now, I've been a fan in the stands for many, many races at both, the Atlanta and Talladega Motor Speedways. You can spend a whole day, coming and going to enjoy the flag to flag coverage, but, when you experience a race from the infield, it's a weekend long event. Once you come into the track on Thursday or Friday, you usually don't leave again until Sunday afternoon. 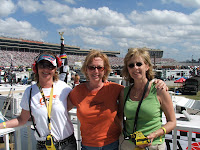 The activities on the track seem to be constant, with practice laps, qualifying rounds, and different classes of races all weekend, leading up to the main event on Sunday. When your hunkered down in the infield, you can't see the track because your surrounded by large RVs and Campers of various sizes. Thus enters the necessity for the observation decks. Both Big Ed and the Lone Ranger have their Raptors rigged for optimum viewing. Even then, you'll have blind spots, but it's fun to watch from this vantage point. The trick is not to spin around so many times while your watching your favorite driver, that you get dizzy and fall off! Ooops! 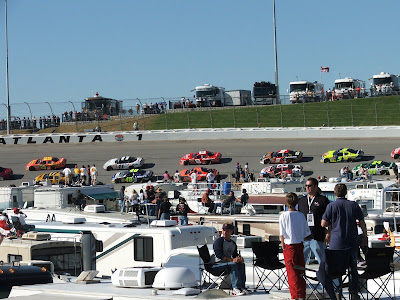 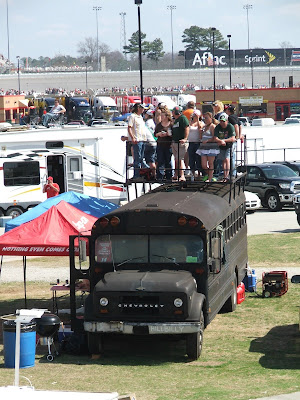 As you can see, you make do with whatever you have, in order to achieve this. Here's the Woodall Family. They would all come, but they couldn't fit. LOL!

When we're not running up and down the ladder to perch on the deck during one of the races, we spend our time playing cards and rolling dice. Texas Hold'em and CLR are two of our groups favorite pastimes. We also pull $10.00 Driver Pools together for each event, giving someone in our group the chance to go home with some extra $$'s. I've been on the receiving end a time or two with these pools of chance. It's all good amongst friends! 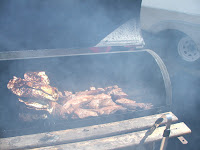 Not to mention the fact, that the grills are going almost non-stop, so there's never a shortage of food and drink.

One time, a couple years ago, I was fortunate enough to catch up with my Nascar hero on the way to the driver's meeting. 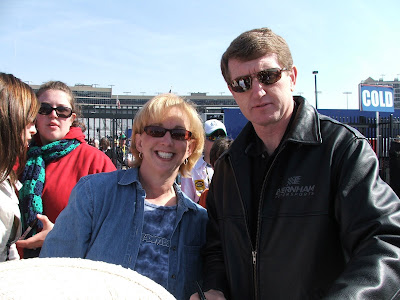 Bill Elliott has been my favorite driver back before he ever won the Winston Million. He was the first driver to accomplish this, and it earned him the nick name "Million Dollar Bill" and he still holds the fastest stock car speed record of 212.229 mph. He's semi-retired now and runs a very limited schedule. He hasn't seen the Winner's circle in quite some time now, but that doesn't mean he's not still my favorite! Go Bill! 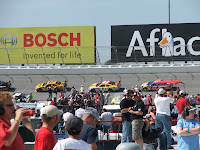 I know there are several of you out there that wonder what the fascination is with this sport. It's hard for some of you to understand the enjoyment of watching a bunch of overpriced, souped up stock cars turning left for 500 miles! Well, I've been a racing fan for as long as I can remember, and and considering most of my racing pals are also our riding buddies, it just gives us another excuse to get together and enjoy each other. The same can be said for our love for motorcycles. It's a passion you have, and you either get it or you don't.

Some of us did mention the fact that we were missing some great riding weather, and we talked of bringing the bikes with us next time. Sounds like a good plan to me. Now we just need to find some poor schmuck who will bring all our sh*t over so we can still have all the comforts of home. Any takers?

I would love to go to a Nascar race. I love watching the races, although I haven't followed for awhile. Sounds like you had a great weekend. If I'm ever over that way I would be the poor schmuck to bring all your stuff just so I could go to see a race. :)
Love the pic of you and Bill Elliott, I'm sure that was a huge thrill!

I'm one of the ones who just doesn't get it, but that's mainly because it's really not that popular up here. It does seem to be getting more popular though, but I think the South will always rule when it comes to NASCAR. All that being said, I would love to check it out. I'm sure I'd have fun even if I wasn't that into it. Endless food, drink, cards and cool people tend to have that effect on me. It's on my bucket list.

Agree with Joker...Would love to check it out some day... per se...as I always only watched it on TV whenever I had a chance.
These are great pictures. Thanks for sharing it all.

Why Nascar? It's the whole package -- the speed, the roar of the engines, the fragrances of meat on the grill, the friends and making new ones, the games ... everything.

B.B... You would never be our schmuck! You could just come and have fun! Maybe we can get Dave and Willy D to do it! LOL! We'll let them have all the chili dogs they can eat!

Joker... I grew up going to the stock car races on Sunday nights at the Dubuque County Fairgrounds with my Dad. When I got older, I'd go with groups of friends. I've always loved the races!

Getting together to party with our pals, icing on the cake!

Baron... You should go sometime! Just to say you did!

Jevans... Your senses are definitely assaulted during a weekend like this. There's something about smelling the burning rubber and racing fuel mixed in with your grilled steaks... ahhh! "I love the smell of stock cars on the weekend!" LOL!

Have friends that love it. I'm into drag racing. If I went I'd have fun. Hell I'd make sure I had fun in jail. Sounds like you had a blast. The sun shine looks great.

But the endless food, drink and friends sounds like a good enough reason for me to go. Sounds like a blast!

I don't get it either. Although I do like drag races, Figure 8's, etc. To me the going in circles thing over and over an over is what ruins it.

Dean, Mr. M and Joker... If I could take you guys to just ONE Race, in the stands close to the track... you would love it! Being able to smell the race fuel when they come in the pits, hearing all the noises of the air guns, watching the activity of scrambling pit crews, feeling the track grit hit you when the cars fly by... ahhh, that's racing!

Also we would arrange for you to wear a headset, so you can listen in to different teams strategize on when to pit, whether to take two tires or four.... on and on.

But if not, it's all good. That's why they make chocolate and vanilla! :)