PIC OF THE WEEK 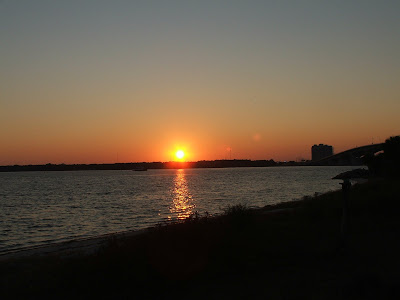 I took this pic last September during Thunder Beach Weekend while Harley and I sat and enjoyed a beer with our pals. We were at a place called "No Name's", a local bar with an outside deck, that sits at the base of the Hathaway Bridge. You're looking across Saint Andrews Bay toward Panama City's beach front area.

Have a nice Monday everybody, and let's say goodbye to 2008!

I say good riddance to '08. What a crappy year. But all is not lost, we made some great friends thru blogging and had some good times. However, looking back on 2008, I see far more hard times than good. Let's hope for a better '09.

I already voted for Pic of the Week, but today's is my favorite. The sun setting on 2008.

Absolutely gorgeous! Thanks, I needed that.

Your site is one that I have bookmarked - really enjoy it. As for 2008, I end it unemployed but happy and thankful. Plans for a new bike will have to be put on hold, yes, but when I look around at what some people - right here and now, friends, neighbors, family - are going through, I know that I am very lucky.
In the meantime it is going to be 48F and sunny so it it is time to throw a leg over the Goldwing and go visit the "Doctor" :).

Wholy Sh*T Where did it go!

It looks so peaceful and warm at heart.

I love the pictures of the rides most. I agree with Ann about todays picture, but voted for Southern Comfort because it reminds me of the Bayous down in Louisiana. The Smokey Mountains are a very close second and I hope to witness their beauty first hand this summer.

Thanks for sharing your rides, thoughts, and pictures with us. It has been a pleasure to join you and Harley on the adventure of 2008.

We're heading to S. Florida to start the new year off right - that right, "DOUBLE TROUBLE"!!! Kitkat will no doubt have his hands full, but I'm sure he won't be complaining to much. We'll just keep people wondering (again) all weekend because he will be the only guy with us...what a lucky man! (hehehe)

We hope that you and Harley have a great New Year and we look forward to hopefully seeing ya'll sometime soon.

ann... I am looking forward to a new year. I've always felt like New Year's Eve gives us a chance for a "do over". If things aren't going so well, heading into a new year is like a fresh start.

dean... this is one of my favorite pics. Happy New Year!

dave... Welcome to my blog and thank you. I'm sorry to hear about your employment misfortune, and your right... it's hurting many. Families are struggling pretty hard right now, but I hope and pray for them to stay strong and diligent. I've always tried to keep in my mind, that living simply and doing without, does not mean I can't have happiness. Family and friends are very dear to me, and that my friend, is where our wealth is.

webster... It may look warm, but it was actually getting a little chilly right about then. Still beautiful though.

AHD... Thank you! That pic was taken about 3 miles from my house. It's funny how one place can remind you of another place. Close to us, is a really pretty stretch of road we like to ride on, that has rolling pastures and trees and creeks along the road, and my friend, who is from Mass, says that piece of road reminds her of the country side at home.

You will love the Smokeys! As far as motorcycle vacations go, the best riding yet, we did in the Smokey's. You get the beautiful scenery AND the playful roads, all in one!

Peek a Boo... Happy New Year friend! I'm sure KitKat will press on miserably acting as escort for "Double Trouble"! Something tells me you'll have the paparazzo following ya'll in no time. Big Ed and Red Light Roxanne are coming up to spend New Year's here with us, so we should be in for a good time. See you soon, and have a great New Year. Be safe!