THUNDER BEACH AND THE 3 B'S... BEACHES, BIKES AND BEAUTIFUL BABES

Take a look at this Fall's Thunder Beach Rally... served up with big blue skies... lot's of sunshine... and comfortable temperatures that hung around the mid 80's all weekend long. It just doesn't get any better than that. 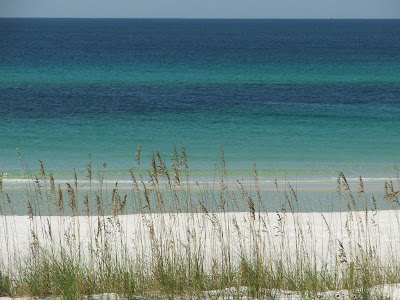 The beaches in Panama City are still just as lovely as ever. In fact, one of my pals revealed to me that they've gotten a lot of Destin and Gulf Shores business because of the oil spill disaster. The city is always changing and building, so the construction along the coast line was a bit of a drag, but we managed to avoid any mishaps while me maneuvered around. 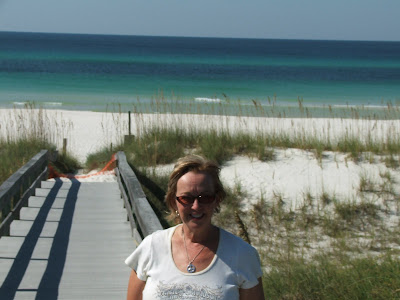 Even though we didn't take advantage of it and stick our toes in the water, I enjoy riding along the coast and being able to look over at the magnificent view. (In between the condo's that is!) 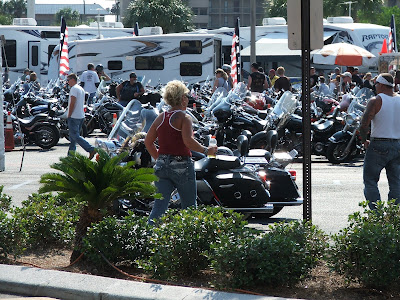 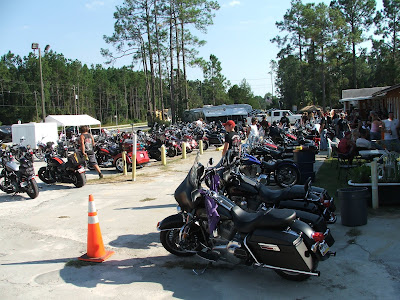 We saw some impressive bikes during the weekend. We walked around several different venues... all of which had their own version of shows and contests. Let me hush a minute and let your eyes feast on some of these beautiful machines. 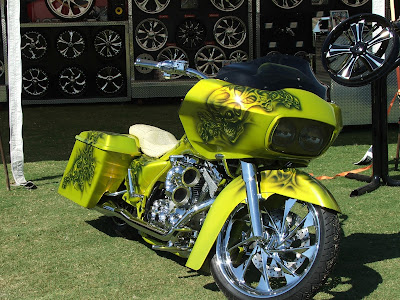 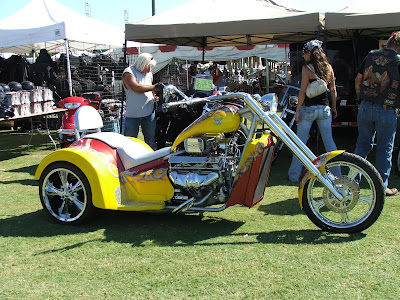 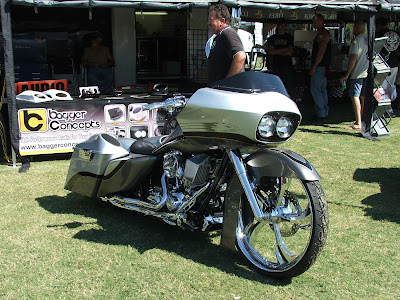 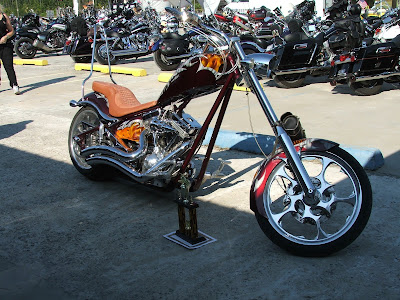 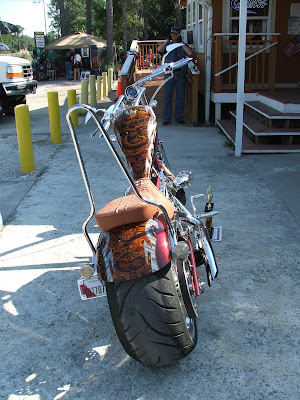 This one is for Dave over at Road Grits Cafe. 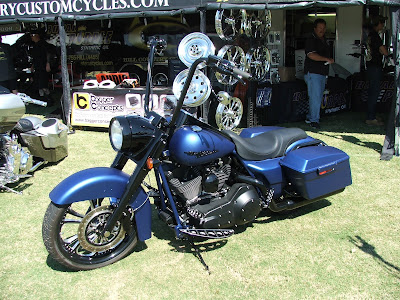 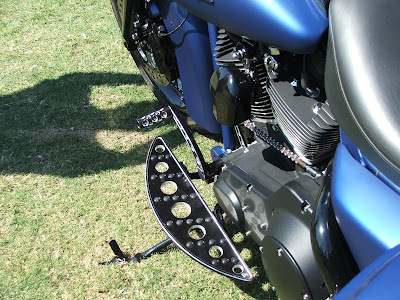 It made me think of you and wondered what you would say about those foot boards. Pretty wicked, heh? 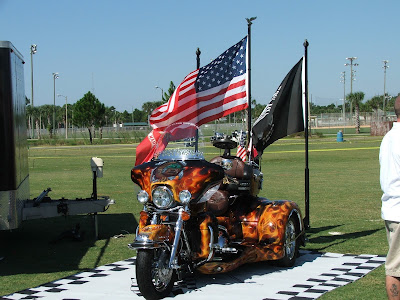 I posted pictures of this trike in my BAGR4LF AND THE BEST IN SHOW post, but it appears he added the flag carrier since then. Very nice! 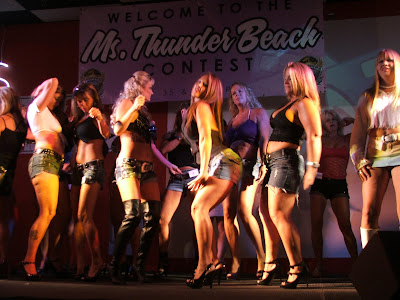 We all gathered around to cheer on our friend, Shooter, as she put herself out there for the Ms. Thunder Beach Contest. The guys in our group offered up their assistance on what "sexy biker chick" attire meant, and even made her go change... twice! LOL! We all thought she looked awesome, but unfortunately she did not take the crown.

The tall skinny blond with fake hair and sparkly boobs won. What do those judges know! 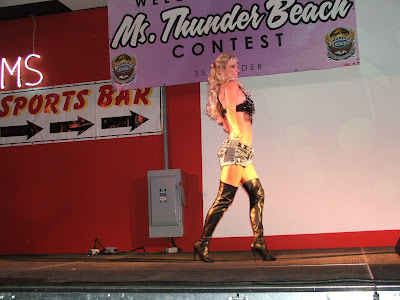 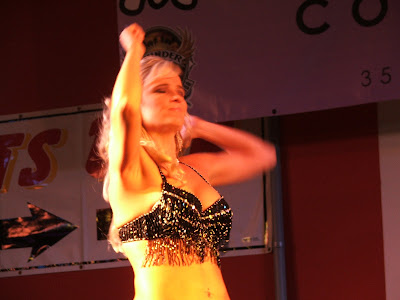 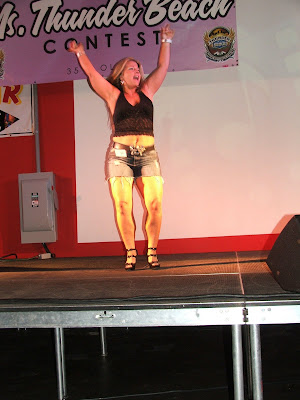 Her legs go all the way up her ass too... they're just not as long as everyone else's. Woo Hoo! You go girl!

Here are a few of the other contestants... for your viewing pleasure! LOL! 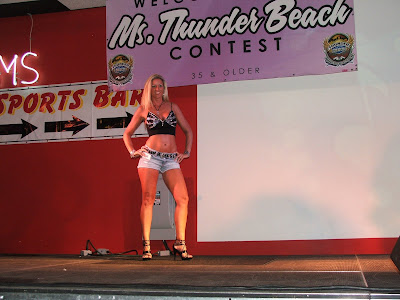 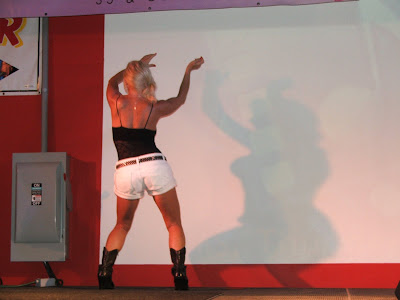 This contestant danced with her shadow... pretty cool. 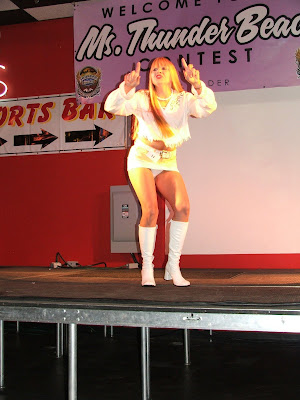 Had to include this groovy chick. I thought she was cute as a button.

Well there you have it... another great time logged in the history book of life. We've been enjoying the Thunder Beach Rallies for about 8 years now, and I have to remind you... it's not so much the rally itself, but the friends we see while we're there.

I want to give a big thanks to our pal, The Pizza Man for letting us stay at his place on the beach. It was good seeing you and we appreciate your hospitality immensely.

Listen up everybody! If your ever in Panama City Beach, and your hungry, you need to eat at Marco's Pizza. It's locally owned and operated (by our friend and his family), and not only do they make really good pizzas, they also have the best Italian Subs I've ever eaten. They're at 7010 Thomas Drive and they deliver too. If your looking for something good to eat... you won't be disappointed. Eat at Marco's!!

Until next time... keep the shiny side up and ride on!

But does the one with the sparkly boobs ride or just look good on the back? I think they should change the rules for all those ‘Miss Whatever’ contests and insist that all entrants ride, not just park your ass on a fender.

Will Marco’s deliver to CA? Do I have to tip the delivery boy?

That looks like a great weekend. As you said, it doesn't get much better than that! Most bike shows in the UK have to be inside as good weather is never assured - oh to be able to enjoy show bikes and the sun at the same time....

Willy... I don't think the guys... err... judges gave a real rip! LOL! She definitely brought her "A" game! My friend, Shooter, practices belly dancing, and even if she can't stand as "tall" as some of the others, she can move herself in ways that make up for it!!
BTW... maybe we can get our buddies to trade deliver... some good coffee for some good pizza. LOL!

Steph... Because of our friends, we did have a great time. The weather couldn't have been better the whole weekend!

Gary... I guess I've been to some indoor shows, but for the most part (maybe it's cause we're in the warm sunny south)they hold rallys and shows under the big blue sky. The downside to that is... when it hot, it's REALLY hot! Makes walking around looking at bikes more of a challenge and an enjoyment.

Been busy. How'd I get in on the babes late? Honey does. Well looks like all had a good time. Thanks for the babes :)

Your welcome... they must have been a nice reward after the honey do's! :)